Proving theorems about angles without angles

In several recent posts, I have been exploring a way of doing trigonometry using vectors and their various products while de-emphasizing angle measures and trigonometric functions.

In this system, triangles are represented as sets of three vectors that add to 0

Notice that none of these formulae make direct reference to any angle measures.

But without angle measures, won’t it be hard to state and prove theorems that are explicitly about angles?

We’ll take as our example the inscribed angle theorem, because it is one of the simplest theorems about angles that doesn’t seem intuitively obvious (at least, it doesn’t seem obvious to me…).

Let’s first go over a traditional proof of the inscribed angle theorem to gain some familiarity. The key is to draw in one more radius of the circle to form a pair of isosceles triangles that share a leg 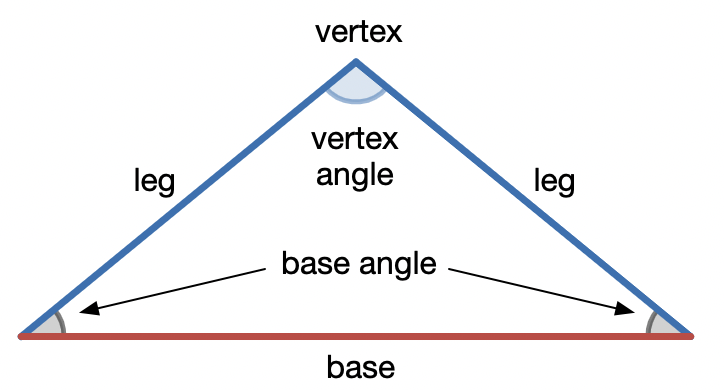 The two base angles of an isosceles triangle are equal, so we can label angles on the figure as follows:

The three central angles add up to a full turn

This proof depended on the theorem that the base angles of an isosceles triangle are equal. Do you remember how to prove this?

Here’s one way: drop a median from the vertex to the midpoint of the base:

This produces two triangles that are congruent because they have three equal sides, and the base angles are corresponding angles in these congruent triangles, so they are equal.

Do you remember why triangles with equal sets of side lengths are congruent? I find that it’s pretty easy to memorize facts like this but forget exactly why they must be trueIf you want to remember how Euclid did all these things, Nicholas Rougeux has published a gorgeous new online edition of Byrne’s Euclid. The distinctive feature of Byrne’s Euclid, originally published in 1847, is that it uses small color-coded pictograms throughout the text to reference diagrams instead of letters, which gives it an appealing concreteness.

Geometric algebra provides an interesting algebraic way to prove that the base angles of an isosceles triangle are equal, embedded as a special case of an equation that is true for all triangles. As usual, we begin with the condition that three vectors form a triangle

Left multiplying the triangle equation by a gives

and alternatively, right multiplying by b gives

and in the special case that the lengths of a and b are equal so that the triangle is isosceles, the first term vanishes leaving

also allows solving for a in terms of b and c by multiplying on the right by c^{-1}The ability to solve equations of products of vectors like this is one of the special advantages of geometric algebra.,

The right hand side is the sandwich product representation of the reflection of b in c, so in words, this equation says that reflecting one of the leg vectors of an isosceles triangle across the base vector gives the remaining leg vectorRecall that equality of vectors implies they have the same length and direction, but implies nothing about location; vectors are not considered to have a location, and may be freely translated without change.. This is a fact about isosceles triangles that I had not considered until doing this manipulation.

With this preparation, we are ready to prove the inscribed angle theorem using geometric algebra.

Call chord vectors through a point on the circumference of a circle c_1 and c_2, radius vectors subtending the corresponding central angle r_1 and r_2, and the radius vector from the circle’s center to the shared point of the two chords r_3.

Then the plane rotation through the central angle is

and we’re seeking a relationship between this rotation and the plane rotation through the inscribed angle,

We can summarize the geometrical content of these diagrams algebraically with two triangle equations and an equation expressing the equal lengths of the radius vectorsThere’s actually one other important piece of geometric information that isn’t spelled out in the algebra here. I’ll come back to this below.:

We can take the first triangle equation and perform a similar manipulation as we did above: left multiply by -r_1, separately right multiply by r_3, and subtract the two results to give

The first term is zero because the lengths of r_1 and r_3 are equal, so this becomes

Let’s go through this manipulation line by line

The geometric product allowed us to exploit relationships between reflections and rotations that I typically wouldn’t think to see directly on a diagram, allowing the proof to be particularly concise.

Alternatively, it’s possible to mimic the original angle calculation a little more directly. Where we previously added internal angles of the triangles, we can instead multiply rotations to compose them:

Interpreting these rotations as internal or external angles requires a little bit of care about signs, but algebraically, the equations are true almost trivially by re-associating and canceling squares of unit vectors.

It has become customary in elementary geometry to identify relationships between directions with relationships between angles, and to identify angles with numerical angle measures. But this is not strictly necessaryIn classical Greek geometry, lengths and angles actually weren’t identified with numbers, likely at least in part due to the fact that lengths are often irrational and angles are often transcendental. Instead, length, angle, and number were treated as separate concepts with some similar relationships., and in this post, I have shown an example of how the same relationships between directions can instead be modeled by products and ratios of vectors without direct reference to numerical angle measures.

The vector approach has the advantage that the condition that three vectors form a triangle is very simple to write down,

whereas the condition that three lengths and three angles describe a triangle is somewhat more complicated, and is not typically written down in full.

This linear vector equation for a triangle makes it straightforward to derive classical relationships between lengths and angles in a triangle, which typically appear as quadratic equations in the vectors. These manipulations can usually be described in a phrase or two:

An advantage of the vector model is that the relevant equations are algebraic in the vectors and their products, whereas they are transcendental in angle measures. So for example, the law of cosines in terms of angles,

is transcendental in the angle \theta, whereas the vector equation

is algebraic in the corresponding vector product ab.

The catch, of course, is that these quadratic equations involve non-commutative products, and there is a definite learning curve to becoming comfortable with this. But in my experience, the effort is repaid along the way through the insight you gain from viewing familiar things from an unfamiliar perspective.

Thanks as usual to Jaime George for editing this post.

Being careful about what we have proved

but actually doesn’t. The technicality is that we have proved that the squares of the rotations through these inscribed angles are equal, but this leaves an ambiguity about the signEquating doubled angle measures has exactly the same ambiguity as equating the squares of rotations, though the ambiguity is perhaps easier to overlook at first glance.:

And in fact there are different inscribed angles that subtend different (but closely related) arcs that satisfy all the algebraic rules we wrote down (including planarity), but that do not describe equal rotations:

I will sketch a way to distinguish these cases and prove the full theorem, without going into full detail.

If c_1 and c_2 are vectors from two points on a line to a given point not on the line, then the sign of the unit bivector

determines which side of the line the given point is on. Given equal squares of products of vectors,

Then inscribed angles that subtend equal chords of a circle are equal when they lie on the same side of the subtended chord, or equivalently, when they also subtend the same arc.

A path not taken

I have to admit that my first attempt to analyze the inscribed angle theorem with vectors went down an unproductive path. I knew I wanted a relationship between a product of radius vectors r_1 r_2 and chord vectors c_1 c_2, and I had the triangle equations

so my first instinct was to solve the triangle equations for r_1 and r_2, substitute into the product r_1 r_2, and expand:

There’s nothing wrong with the algebra here, but it just isn’t very productive. We now have a sum of 4 terms that is hard to interpret geometrically. Since the right hand side that we’re seeking, (c_1 c_2)^2, is a monomial, we would have to eventually factor the sum on the right hand side, and factoring is difficult—especially when dealing with multiple non-commuting variables as we are here.

This mis-step is worth discussing because it is an example of a pattern that turns out to be pretty common when using geometric algebra to analyze geometry problems. When presented with a product of sums, it is a natural instinct to try expanding into a sum of products. This is sometimes productive, but it introduces a few issues:

For this reason, a useful heuristic is to prefer using commutation relationships (e.g. between parallel or perpendicular vectors, or between vectors that all lie in a single plane) to re-arrange a geometric product. When it works, this is better than expanding products, hoping that some terms will cancel, and then attempting to factor the result. When it is necessary to expand a product, it can be useful to expand as few terms as possible and then try to factor again before further expansions in preference to expanding the entire product at onceHongbo Li elaborates this idea extensively in his book. For a briefer introduction, see this paper or these tutorial slides..